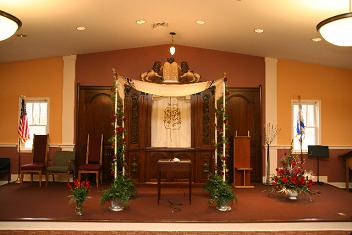 The seeds for forming Or Chadash planted in the summer of 1987. Rabbi Daniel Freelander, Director of the New Jersey-West Hudson Valley Council of the Union of American Hebrew Congregations (UAHC), thought that with the completion of Route 78, the Jewish population would soon grow in the Hunterdon County area. He telephoned the mayor of Clinton, Bob Nulman, to question whether there were enough Jewish people to organize a Reform congregation.

The following year, Central Synagogue of New York City supported us by sending gifted clergy to conduct services. Rabbi Michael Farhi was engaged as the Temple’s first ordained rabbi for our third season. Rabbi Richard F. Steinbrink then took over leadership. Amy Kessler headed the committee that organized the Religious School. For ten years, the congregation became stronger through the dedicated efforts of a growing number of members. By the time that Rabbi Steinbrink retired, the congregation was flourishing, and the foundation had been established to enable the construction of a synagogue and temple facility.

In the summer of 2000, the building was completed, and Rabbi Eric Siroka joined Or Chadash as part-time and then full-time Rabbi. Shortly thereafter we were able to celebrate the High Holy Days in our new home for the first time. In the summer of 2006, we welcomed our current Rabbi, Joseph M. Forman. In 2008, we celebrated the 20th year of Or Chadash with a newly renovated building.

In 2017, we created the Betsy Award to honor Betsy Zalaznick, our Director of Religious Education, for her 20 years of service.