November 8, 2011 By urjnetworkadmin in OC Holidays 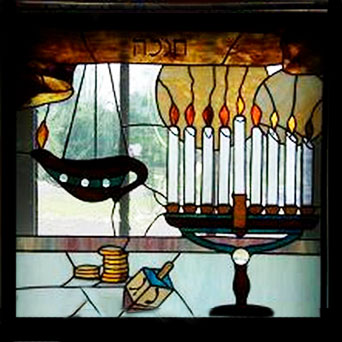 What is the meaning of Hanukkah?

There are many answers. Some are filled with the myths that entertain children; some are scholarly treatises on the history of the Greco-Assyrians and the Kingdom of Judea. No matter the comprehensiveness of the answer, every year I am asked by adults and children if the oil really lasted for eight days.

I have been discussing the real meaning of Hanukkah with our religious school students and wanted to share what they have been learning with our entire congregation. Rabbi Hara Person, the editor of the URJ Press, has written a wonderful synopsis of this topic. Click here to read the entire article — “Will the Real Hanukkah Please Stand Up?”

Learn how it all began, with the story of Antiochus Epiphanes and the Maccabees…

Alexander the Great of Greece conquered Judea, the home of the Jews, in 333 B.C.E. At that time Alexander allowed the Jews to maintain their beliefs and traditions. With Alexander’s death, the lands he ruled were divided between the Ptolemies, who ruled Egypt and the Seleucids, who ruled in Syria. The Ptolemies and Seleucids fought for control over Judea. The Syrians under the influence of the Seleucids became Hellenized, adopting Greek culture and habits. In 198 B.C.E. Antiochus III, king of Syria, conquered Judea. Like Alexander, he also allowed the practice of Judaism. All this changed in 175 B.C.E. when Antiochus IV, also known as Antiochus Epiphanes, came to power.

Antiochus Epiphanes wanted to Hellenize the Jews. He outlawed Sabbath observance, circumcision, and Torah study. The Temple in Jerusalem was desecrated with a pagan altar and Syrian soldiers set up altars to the Greek gods throughout Judea. A Jewish resistance movement began to grow, led by a priestly family known as the Hasmoneans or Maccabees. The leader of the family was Matityahu (Mattithias) along with his five sons – Judah, Yonatan, Eliezer, Yochanan and Simeon. Three years of fighting ensued and though the Jews were greatly outnumbered they prevailed. This was a great victory for religious freedom.

The Temple in Jerusalem was cleansed and a ceremony of rededication was held. The Hebrew word Hanukkah (also spelled Chanukah) means dedication.

The rabbis of long ago faced a dilemma; they did not want Hanukkah to be looked at as a military victory alone. In the Talmud, the rabbis recorded the legendary miracle of the oil: When the Maccabees had cleansed the Temple and they were ready to kindle the Ner Tamid – Eternal Light, only one small jar of oil marked with the seal of the Cohanim – High Priests was found. It would last only one day and it would be eight more days before more oil could be prepared. But a great miracle happened; the oil lasted for eight days. According to the rabbis this is the reason we celebrate Hanukkah for eight days.

In choosing the haftarah for the Shabbat of Hanukkah, the rabbis sought to teach us another lesson about faith. The haftarah , Zechariah 4:1-7 includes the verse, “Not by might, nor by power, but by My spirit, said the Lord of Hosts.” This was to remind us that it was not by the military force of the Maccabees that the Temple was restored, but it was by the spirit and influence of God that these events occurred.