October 28, 2011 By urjnetworkadmin in OC Learning

As part of the Bar/Bat Mitzvah preparations all of our students complete a Mitzvah Project, an opportunity to do Tikkun Olam — repair the world. One important requirement of the Mitzvah Project is that our students must experience “getting their hands dirty!” Here is just a sampling of the diverse activities our Or Chadash students have completed or are doing in our community

Emma (December 1, 2018) held a weekly knitting group to make scarves and hats. She donated them to Hunterdon Medical Center.

Meredith (November 3, 2018) helped to raise a seeing eye dog to bring to libraries and nursing homes where she read to others.

Ricky (November 11, 2017) created a documentary film on the synagogues of Newark, New Jersey.

Kelly (May 6, 2017) volunteered every weekend at Grateful Bites, working with adults with special needs as part of the Ability 2 Work program.

Eric’s (January 7, 2017) project was tutoring math to a 5th grader; assisting in an Eagle Scout Project; and performing.

Cassondra’s (September 24, 2016) project was volunteering at The Chelsea at Brookfield, an assisted living center.

An-lin’s (September 17, 2016) project was fundraising for the children of Dapu Social Welfare Institute.

Emily’s (May 14, 2016) project was collecting used sports equipment to donate to needy families.

Talia’s (April 9, 2016) project was a woodworking project to create an Elijah’s Chair.

Sam’s (March 19, 2016) project was volunteering at the YMCA coaching soccer to younger kids.

Evan’s (March 12, 2016) project was teaching self-defense classes to a variety of groups.

Ben’s (December 5, 2015) project was volunteering at the YMCA assisting a basketball coach with children ages 7-9.

Nadia’s (October 25, 2015) project was volunteering at Independence Manor baking with the residents and singing and playing guitar.

Shayna’s (May 30, 2015) project was volunteering at Baker’s Treat working with disabled individuals through Ability2Work.

Sarah’s (May 16, 2015) project was volunteering at Saddlebred Rescue working with horses.

Bowie’s (May 2, 2015) project was creating a pamphlet and videos to educate individuals on diabetes.

Julia’s (September 13, 2014) project was helping to harvest vegetables and teaching people about nutrition through America’s Grow-A-Row.

Michael’s (May 3, 2014) project was cleaning up the local parks. He likes keeping the paths and parks free of debris for others to enjoy.

Jazzmine’s (April 12, 2014) project was the creation of a scrapbook of kids who were born prematurely. She presented it to the Morristown Memorial Hospital Neonatal ICU unit, to help parents who have premature newborns with inspiring stories.

Sarah (March 1, 2014)ran the Rothman Institute 8K as fundraiser/solemate for Girls on the Run.

Ayla’s (March 8, 2014) project was supporting a program called Play It Forward, LLC. This program helps families who have a child with a disability. Her project was in honor of her friend Matthew.

Sam’s (March 22, 2014) project was volunteering weekly at the preschool that he attended at Spruce Run School. He has worked with kids who have needed some help with social situations

Abby’s (March 29, 2014) project was helping the preschool class from Old Greenwich Presbyterian Church with their Mission Garden (affiliated with America’s “Grow- A- Row”) In the winter she assisted Mary Litsch (Director of Resident Services) at Country Meadows Retirement Community in Bethlehem, PA.

Robyn’s (November 16, 2013) project was running a toy drive and book drive for the children of families who lost their belongings to the Oklahoma tornado.

Amy’s (October 12, 2013) project was called “Amy’s Blankets For Babies.” She made blankets for St. Peter’s Hospital to be distributed to children in the Intensive Care Units, which she delivered on her 13th birthday.

Brenna and Samantha’s (June 8, 2013) project was drafting the help of family and friends to collect at least 180 caps. There were several people including Brenna, knitting and crocheting chemo and preemie caps. These caps were donated to the hospitals that could use them most.

Jared ’s (May 18, 2013) project was designing a t-shirt and raised over $4000 for the Ocean Township Red Cross to give to all the people who suffered from the hurricane Sandy.

Gillian’s (April 6, 2013) project was working with SHIP in Somerville NJ and making “ziti for the needy”, serving meals at the soup kitchen, and collecting food items.

David’s (April 13, 2013) project was volunteering at the YMCA teaching 6-9 year old boys the rules of basketball.

Lyra’s (April 20, 2013) project was to make and donate 100 fleece tie blankets to children at the Children’s Hospital of Philadelphia.

David’s (April 20, 2013) project was volunteering at Tabby’s Place, a cat sanctuary. He also made Shabbat visits to some of the residents at Independence Manor, an assisted living home.

Rachel’s (March 16, 2013) project was collecting needed items for an orphanage in Haiti.

Shay’s (November 17, 2012) project included running in a 5k race in Ivyland, PA. She raised money for the Cornelia DeLange Foundation in honor of her cousin who was born with this syndrome.

Jenna’s (October 13, 2012) project involved sewing quilts for children to be donated to hospitals.

Jack’s (September 8, 2012) project combined his mitzvah project with his promise to the Boy Scout Slogan, “Do a good turn daily”. This makes it a life time commitment of making the world a better place one good turn at a time.

Jordan’s (May 19, 2012) project included weekly trips over the course of six months to the Hunterdon Humane Animal Shelter to walk and play with the dogs. He also collected and donated needed items and monetary donations for the shelter.

Sydney’s (April 28, 2012) project focused around the needs of the elderly. She prepared meals and delivered them to people in need, living alone, or house-bound.

Danny’s (February 4, 2012) project was helping a neighborhood family by tutoring one boy in school work and another in learning Hebrew.

Mei-lin’s (January 21, 2012) project was collecting donated bicycles and sewing machines for Pedals for Progress (www.p4p.org), which sends them overseas for transportation to jobs, markets and schools, and for economic development.

Kelsey’s (September 10, 2011) had two projects. One included donating funds to a horse owner who could not afford veterinary care for her horse. Kelsey also donated her
time to “Driving for Surviving” which is an equestrian program designed for children who have been diagnosed with cancer.

Kim’s (September 10, 2011) project was Common Sense for Animals, a no-kill shelter where she regularly feeds and cares for sheltered cats.

Thuy’s (December 3, 2011) project was at Riding With Heart, where she worked with autistic children learning to ride horses in a therapeutic setting. She also helps out at America’s Grow-A-Row whenever she has time.

Annie’s (December 17, 2011) project was volunteering at Allie’s Kids, an equestrian program targeted at both children diagnosed with Autism and other special needs and their siblings.

Samantha’s (May 7, 2011) project was preparing for a butterfly making station set for Mitzvah Day on May 15th. The butterflies were sent to the Holocaust Museum in Houston who collected 1.5 million butterflies to remember those children who perished in the Holocaust.

Caitlan’s (May 14, 2011) project was creating Plushies for Peace. Caity and her friends made plushies, small, unique, hand-made stuffed animals, which they donated to the children of deployed servicemen and women.

Abigail’s (June 18, 2011) project was volunteering along with her Dad at Common Sense for Animals, a “no-kill” animal shelter in Washington,NJ.

Jordan’s (October 2, 2010) project was to volunteer for the HOPS program, and help special needs children play baseball, tennis and soccer.

Parker’s (March 12, 2011) project was collecting gently worn soccer shoes that will be distributed to kids in need around the world by Peacepassers.org.

Hannah and Alyson (April 24, 2010) are doing their mitzvah projects for the Hunterdon Human Animal Shelter. They will help in the socialization of the cats, dogs, horses and goats as well as cleaning of their cages and living areas.

Todd’s (May 15, 2010) mitzvah project has been volunteering for the Special Olympics. He is trying to promote the Special Olympics Young Athlete Program in Hunterdon County. He presented an in-service to Hunterdon Pediatrics and is working with a couple of school districts to utilize this free program in their preschool classes.

Megan’s (April 25, 2008) mitzvah project was to volunteer at the Interfaith Hospitality Network. She cooked dinners for some homeless families , visited with some of the families and entertained the children staying at the church. This year together with her girl scout troop she Collected food for the Flemington food pantry, collected 120 boxes of girl scout cookies and donated them to the soldiers in the middle east and the Veterans Hospital and visited the veterans in the VA Hospital to deliver the cookies. Megan will also be donating some of her Bat-Mitzvah gift money to the Parkinson’s Disease foundation. Megan will become a Bat-Mitzvah on April 25th.

Matthew’s (June 13, 2009) in working on two Mitzvah Project activities. First, he has become the official tutor for his friends. It’s amazing how often the phone rings late in the evening with an emergency homework question. Second, he makes up birthday bags for the food pantry in Flemington for youngsters to have a special treat for their special day.

Megan’s (May 30, 2009) has chosen to enlist the help of family and friends to help her with her Mitzvah project. Megan is knitting chemo and preemie caps. Once she has finished knitting her caps and collecting the others she will donate them. Megan is thankful that she has help making her project what she wants it to be.

Sam’s (June 13, 2009) volunteered at Topsoccer Saturday afternoons assisting disabled kids learn and play soccer. It was a perfect fit for Sam who is an avid soccer player himself. He got to spend time doing the thing he likes while really helping other kids learn about a sport. Topsoccer is run in the fall. There are similar organizations run through the year for basketball, tennis and baseball. In addition, Sam has been an active part of our family in helping deliver dinner to families in the Interfaith Hospitality Network. Sam really excels at visiting with and making the kids of the families in the Network feel comfortable in a difficult situation.

Samantha’s (September 20, 2008) “adopted” a soldier as part of the Soldiers’ Angels organization, which is dedicated to supporting men and women who have been deployed overseas. Samantha “adopted” St. Zhang, who is a Marine station in Iraq. Samantha write one letter a week and mails monthly care packages.

Daniel (April 5, 2008) has decided to become a “Mitzvah Person” and volunteer wherever and whenever the opportunity arises. He has assisted at the Flemington Food Pantry, Hunterdon County YMCA, and this summer will volunteer in the Child Watch program.

Jeremy (May 17, 2008) is cooking weekly dinners for a family living in Flemington that was part of the Interfaith Hospitality Network. The family now lives in an apartment but could still use some assistance. Jeremy refills a cooler with food once a week to help defray the costs of their grocery bills.

Jake (June 7, 2008) is raising a Seeing Eye dog puppy through 4-H and the Seeing Eye. Wonder came to live with the Altshuler family at seven weeks old. 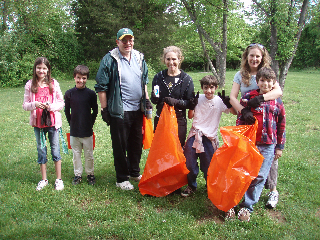 Rachel’s (April 11, 2008) mitzvah project combined her interest in children and education and reading. Rachel worked at the Kangaroo Kids Childcare and Learning Center, volunteering her time to work with the Kindergarteners there. She helped them with homework, taught some lessons and played with them. Rachel also asked each of her Bat Mitzvah guests to donate a children’s book to the Salvation Army Aftercare Program, a program that provides a safe environment for kids in inner city neighborhoods. It was an eye opening experience and Rachel donated over 60 books to the children at the center in New Brunswick. She had visited the center before she decided to do this project and then after she collected the books, we delivered them and they had a party to thank Rachel.

Samantha’s (September 13, 2008) Mitzvah project supported The Womens Crisis Services of Hunterdon County. This provides services for victims and survivors of domestic abuse. She is collecting needed items for the women and children.